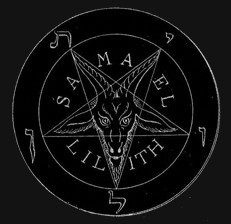 The Devil's Notebook, written by Anton Szandor LaVey is a book I actually managed to finish a few days back. (I start reading many books but keep getting distracted!) It's not ruined with length since it's only 147 pages in its entirety. I have no complaining about the contents of it but rather it managed to surprise me pleasantly. This actually says a lot since I had previously read The Satanic Bible from the same author and expections were set high!

In practise the book is a collection of essays, only connected by themes of Satanic philosophy and LaVey's personal interests. Essays are about various topics: occultism, magic, television (the new god of men!), Christianity, different types of humans, justice, what it's like being a satanist, androids, humand behaviour as well as human nature and so on and so on and so on.

My favourite essays were the ones written about LaVey's observations on human nature and habits. One of the essays which made an impression in particular, was one called The Goodguy Badge. It tells about people's compulsive need of finding ways to justify their view of themselves as the good and righteous. To themselves and to others. As some examples LaVey presents attending church every single week or being a good believer in other ways, opposing some generally hated subject or person or donating a few pennies to charity. None of these actually really matter in any substancial way. Being a good church-goer does nothing. It's easy to say one hates Hitler, he's been dead for decades and everyone agrees. However, it does nothing. Donating a few pennies to charity might make one feel good about themselves, feel like they're doing something great! Yet, that also really does not do much. These are simply ways for people to make themselves feel like they're on the right side, morally or otherwise. As well as justify their deeds that could otherwise be seen as 'evil'...

The book doesn't really require any previous reading... However, I do recommend reading The Satanic Bible first, as otherwise some references might seem nonsense. Not only that but when LaVey talks about magic, it might seem like a lot of nonsense superstition unless one has already grasped his idea of what magic is.

To better show why this is important, here's a brief explanation... According to the Church of Satan, magic isn't a way of influencing people's psychology. Manipulating those around you is called lesser magic, charm. Whereas attempting to influence one's own psychology is called greater magic. LaVey and other satanists like to use magical terminology for describing psychological methods and phenomenons. (for many reasons to which I won't go into here) Understanding this shows the essays not as mystical mumbo jumbo, but as analysis of people's psychology and ways of influencing it.

Back to the book. Especially nice surprise was the humour. Based on previous experience from reading The Satanic Bible, I wasn't really expecting that. The humour is at times a bit dark and LaVey does not sway away from making fun of idiots with his excellent wit. However, the book managed to make me laugh more than any other I've read in years. LaVey is great at writing, while simultaneously keeping that little twinkle in his eye.

All in all, I warmly recommend the book for those, who are interested in human nature and raw realities of the world we live in. Those with no tolerance for the bizarre might want to consider twice before picking this book. The structure of the book also makes it an excellent read on trips, as the short essays are quickly read on the fly. And as the essays aren't particularly interconnected, continueing where you left off is no trouble at all. LaVey has achieved a form of life-after-death... entertaining and teaching us beyond the grave.

What happened to boredom?

What happened to boredom? Usually I get bored very quickly whenever I'm not doing anything. However, I now notice I can sit for over an hour without really doing anything. Boredom is quite a big factor in my life and I can't say I'm happy about the lack of it.

At least in my own case, boredom is one of the forces which drives me forwards. It especially helps me to do the so called 'important' things. If I get bored with even entertainment, I tend to start cleaning or doing something else useful. Perhaps I go out for a walk or do some studying. I might even study some mathematics or read Marx and Lenin. When boredom strikes, I do things I wouldn't otherwise necessarily feel like doing.

Now I haven't been cleaning or going for walks. For the whole week, I've more or less been just sitting in living room, not really doing anything. Not that there aren't things that I should be doing. I should clean, do some math exercises about matrices, finally finish that last damn physics laboratory work I've for some reason kept pushing for later and later... but I just don't feel like it. I'm not bored enough to feel like it.

Perhaps here at home town (I'm on vacation) I do more fun or exciting things than usually, which in turn keeps boredom away? Perhaps I'm simply expecting to have fun later so I don't get bored now. Whatever the reason, I do hope I'll get bored soon.

To begin with, let me state that I am not a security expert by any stretch of imagination. Quite the opposite, really. Therefore everything here is my own thinking, not based so much on knowledge but common sense. There is now much talk about cyber security on television. That's fine and all, but they tend to leave something important out. I can only guess their reasons for that but I'd still assume it's a big threat to the Finnish society. I'm of course speaking about proprietary, closed source, programs which are being used in Finnish homes and institution.

Let us first look at it at the level of an individual. An average Finn probably has at their home a computer that runs the Windows operating system. They use Google's Gmail or Microsoft's Outlook as their email provider and use a phone with Android or iOS daily. These are all programs and services provided by huge supranational companies. Most of these companies are also especially American (the USA). So where's the problem?

Let us imagine a situation in which Google wishes to persuade Finland to do something. For instance, to stop goverment's hypothetical proposal to better its citizens' privacy online. Google could, among other things, just stop providing services in Finland completely. The people would most likely quickly turn against the proposal if it meant losing Youtube, their email, cloud services, phone's operating system and its apps, etc. In this way the American companies have a great capability to affect Finnish decision making if they so wish. Not to speak of the less obvious ways to influence decision making: For example, by controlling what users of their programs can see on social media. Just by showing mostly negative articles and posts about the thing they oppose, they can turn people against it. Because we do still live in some sort of a democracy, companies can, by influencing people's opinions with tricks, have plenty of power even on the level of society.

Windows operating system is malware. It has known backdoors which American intelligence agencies are known to have used in the past. Microsoft also has full access to the device with capability to change anything, add and remove software as they wish. For this reason the fact that Finns use this program is a huge security threat! The information collected could obviously be used for controlling the masses and blackmailing individuals. It most certainly doesn't take an expert to see how this is a threat to the society. Is it not included in the duties of the Finnish goverment to make sure its citizens rights are respected, including the right for privacy? (in Finnish constitution) Of course, the goverment isn't doing that but instead making us more and more dependent on American services.

The same problems can be seen at the level of organizations. Finnish companies, schools, libraries, hospitals, etc. are using proprietary programs provided by American companies. There was just a news story that broke out about Apotti system that is being implemented in Southern Finland. It's (among other things) a program for handling patient information and the article was about problems with privacy. The program is provided by American Epic Systems company. Who's the idiot whose idea this was? And what were the motivations behind this decision? Lets go ahead and tie the information of Finnish patients to a system controlled by an American company! A huge risk to privacy and security and while at it, we're making ourselves dependent on outside factors. What could possibly be a better idea?

Let us now, for fun, imagine another scenario in which this cyber threat I've been speaking of shows itself. Let us imagine that for one reason or another, the USA starts aggression towards Finland. Militarily or otherwise. (let us also pretend they don't have the military power to crush us right away, just for the sake of argument) By making ourselves so dependent on the American companies, which in time of war would surely quickly give in to the US goverment and its demands, we've made ourselves very vulnerable. How large part of the Finnish society could they disable? The systems in hospitals could stop working. Schools would more or less be paralyzed and same goes for libraries. How much are our shops relying on similar software provided by similar companies? I don't know. What if every Android phone and Windows computer stopped working? Banking services are more and more online, as is everything else. How would we then be able to access these? Many young people don't even own a television or a radio but use computer to reach those services instead. How would we then communicate messages to people easily? (which can be useful in time of war) How would this affect post and logistics in general? Busses and trains? Planes?

Wouldn't it already be time to stop this ridiculousness and really invest to free software that all municipalities could freely use, apply and improve? Perhaps the decision makers should finally defend Finland's independence not only in their speeches but also with actions.